This weekend is romería in our pueblo.

In fact it is romería season in Andalucía – they are happening in most places each weekend for the next month.

The big one, the biggest in Spain in fact, is the romería for el Rocio, in Huelva province (Andalucía).

Anyway this isn’t about Rocio. It’s about the one in my village. It has been going for 20 years now and is pretty popular.

A romería is a Christian pilgrimage, so naturally, an image of Christ gets taken down from his dusty shelf in the church, plonked on a cart, decorated with lots and lots of flowers, and everyone sets off to walk (or ride in a cart) to the local party place.

Because this is a religious festival, and not just an excuse for a piss-up, it starts with a mass in the church at 8am.

About an hour and a half later (don’t forget the church is well full – so an awful lot of people to take communion) the procession sets off.

Our village has a “hermandad” – a brotherhood – which takes the lead in organising the whole event. It was founded a few years after the first romería, and now has 200 members.

The procession winds its way slowly, very slowly, round the old town. There have to be some advantages to buying an old Spanish stone house, and one of them is that all the religious processions come past our house.

Then they go back to the main street in the village, hit the main road, hold up all the traffic along the coast for some considerable time, and finally have a rest about an hour later under some trees on the bridge over the river. It’s about a 25 minute walk to this bridge normally.

I say rest, I really mean they get stuck into eating and drinking. There is endless jamón, bread, beer and soft drinks. There is usually anís too. I noticed a couple driving past this morning at 10am had nearly finished the litre bottle of San Miguel in the car between the driver and passenger seat.

After another couple of hours the procession manages to move another 1.5 kms into the local town and go to church for a few more blessings and prayers. And then it’s party time. Well, for those that haven’t already started.

They go to a big open space, eat, drink, dance, and have a great time. The senior member of the hermandad says some 4,000 people turn up to party on.

About 9.30pm [ETA….er.. nearer 10pm, as the noise has just started now] they arrive back in the village and go to church again so that Christ can go back on his shelf for another year. Obviously far less people go to church at night. A lot of them just stagger home. Some hang around outside the church waiting for the flowers from the wagons to be given away. And fortunately for the drunken stockmen – so smart and assertive in the morning – the buyos know their way home and point them in the right direction.

Nearly forgot to add – the council obviously throws a load of money at it too. New straw hats and bandanas every year, plus food and drink all adds up. 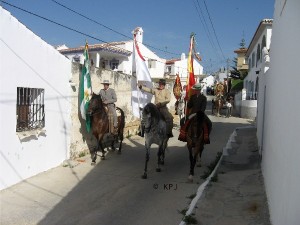 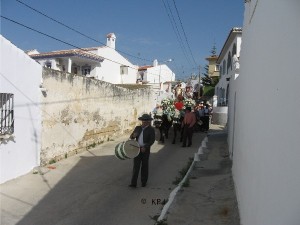 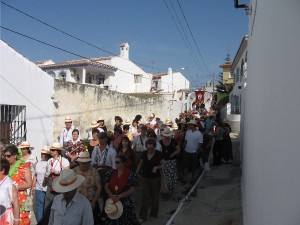 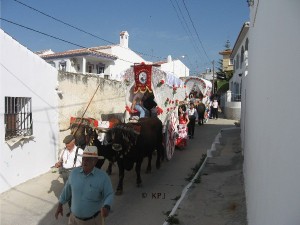 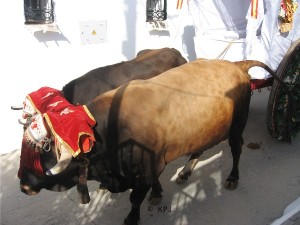 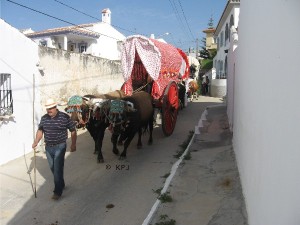 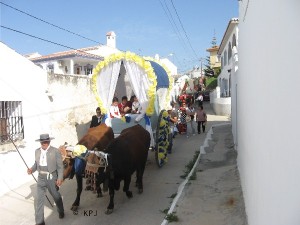 Source: Apart from me, Sur.es for info about the brotherhood.