I am sad to say that our lovely big furry old dog is no longer with us.

Pippa went out yesterday morning, but during the day barely moved and struggled to get up. When he finally got up this morning, my partner took him to the vet.

Four and a half years ago, he had similar problems and we thought we’d seen the last of him, but our Spanish vet diagnosed tick disease, and with firocoxib for pain and doxycyclin as an antibiotic, he came through and was soon skipping around looking for cats to chase again.

He’s been with us eleven and a half years, since he found us wandering around the streets of our pueblo. Back then, we had our two dogs that had travelled down with us from the UK. Pippa had been on the streets for months apparently. He was too big for anyone to take in, so after a few meetings with the huge apprehensive dog, we took him home. Estimated age? Two, three, four, which puts him at 14/15 now.

We identified him as a cross GSD/husky, and apparently they are deliberately bred in parts of America, Pennsylvania I think, as one US tourist informed us when he bumped into Partner and Pippa.

He is the sweetest dog I have ever known. Gentle, undemanding, perfect with people, happy for strangers to hug him in the street, and good with other dogs.

When we took in Little Snowy two years ago, he was his ever patient self, as Snowy played puppyish games with the big old dog.

Saying goodbye is the one downside of sharing your life with animals. But in return, we get years of enrichment and unconditional love.

I’ve left comments open, after your views on my recent poll, but please note that if you do write, I won’t be answering. Please don’t send emails for the same reason. I’m sorry, but I just don’t feel like it, and for once, I’m rather lost for words. 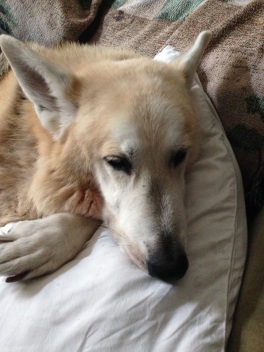 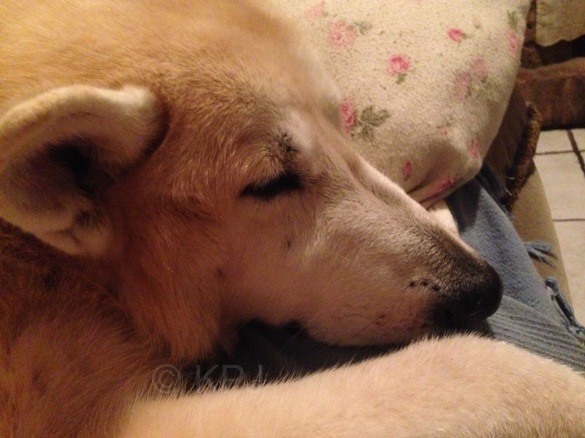