Anyone who shares their life with animals knows how easy it is to fall into the habit of anthropomorphising. To the extent that some of us write dog and cat blogs on behalf of our companion animals.

In a way, it’s a fun and creative way to write, and gives us chance for the most part to write humorously and post lots of cute pix.

Author Kristen Heimerl has taken this one step further and produced a children’s book based on her three cats and an incident that happened one night when she and her cats noticed a suspicious looking character in their street.

I’ve spent years reading dog and cat blogs, so I was interested to see how this turned out. It’s aimed at young children, so the storyline is simple. We meet the three cats, their person Anna, and the tale is told from the perspective of ‘Inspector’ Dewey.

As with all books for young children, it’s very visual, lavishly illustrated throughout. I found some of the drawings a little too stylised, to the extent that some of the cats looked like fat blobs. OK so one of them is meant to be big because he eats a lot, but still, I’d have liked them to have looked a bit more catlike! But that’s just a personal preference and overall the illustrations complemented the story well. My partner thought the artwork was very good. In terms of prose, perhaps the most original and striking use of words was Dewey’s engaging way of using alliterative fishy exclamations such as ‘Great grouper!’ ‘Miserable mullet’ and ‘Holy halibut’.

It would make a nice present for a young child, especially if there is one cat or more in the family. At $20 it’s not cheap – BUT – fifty per cent of the profits are going towards funding veterinary care for pets whose families are in need, so that they can stay with their families rather than go into a shelter. A commendable cause without a doubt.

‘If you love a cat, you know they’re special.

‘Many studies have shown that pets offer significant benefits to people who love them, including improved heart health, reduced stress, decreased loneliness, and increased social interaction.

‘But caring for a cat—especially a sick one—can be overwhelming when money is tight. I know this because I had to help my cat during a time of transition. Lily needed surgery to help her live a normal cat life. I stressed and struggled to scrape together the funds. Since then, I’ve realized how many owners need a little financial help to return their pet to health.

‘Sadly, during my volunteer work in shelters, I’ve seen a lot of owners leave their beloved companion behind because the financial burden became too big.

‘Our pets belong in their proper place: our home.

‘Seeing our pet suffer in poor health is distressing. Surrendering our lifelong companion to a shelter because we have fallen on tough times is truly disruptive—to us, our pets, and the shelter system.

Three Norwegians currently provides funding for preventive and acute medical cat care, but would like to extend to all pets if funding becomes available. It doesn’t include chronic ongoing medical conditions.

And, a story about Pippa is due to be published shortly. ‘Misery’s Mishap’ (originally written as a guest post on Pippadogblog) is going to be included along with other animal tales, and subjects such as life, family, love & romance, faith, and even the odd, inadvertent run-in with some quite unsavoury fictional characters.

Caboodle is an upcoming collection of short stories, poetry and songs, by Kevin Cooper.

I’ll finish with a reference to Podencos though. I originally rejoined evil Facebook for a book review group I’m in. Then I discovered there were sites offering jobs in Gib, so I scour those daily to see if I can find work for Partner. After all, he’s more in demand than I am.

Inevitably I ended up looking at some Podenco groups. How many are there! Unbelievable. Podencos make up a huge proportion of dogs in rescue shelters, certainly in my part of the world.

There are many rescue groups trying to find Podencos homes in Northern Europe and even the USA. In Germany they were recognised as a distinctive breed earlier this year. 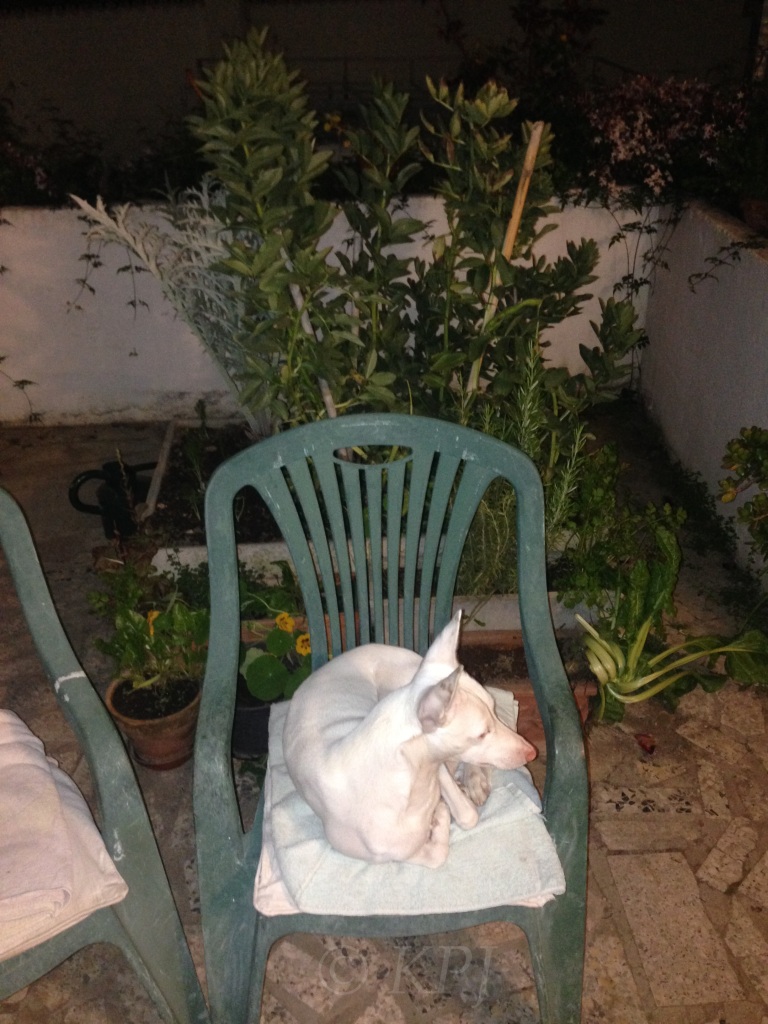 They are often kept chained up, starved – Spanish logic thinks this makes them better hunting dogs – and the lucky ones end up in shelters, often emaciated and near death, after one or two seasons hunting. Not all the abused ones make it, despite the care from shelters, some are just too poorly. One was thrown out by a hunter who had thoughtfully chopped off its ears first. How sick are some people. Others are shot, drowned, thrown down dry wells, or hung from trees.

I’ll be the first to say Podencos are not for everyone. Snowy is probably the most affectionate dog I’ve ever had. He’s also the most demanding. When he wants to play ball, it is drop everything and play ball. If your legs aren’t in the right position on the bed, he’ll move them, so he can get comfortable curled up between them.

He eats at night, presumably to fuel himself for going hunting. But although he doesn’t eat his food during the day he Does. Want. Treats. This polite Podenco request starts with a low rumbling growl, followed by full-on barking if treats don’t appear quickly enough. If he was a person he would live on smoked salmon and fillet steak. In fact if we weren’t vegetarian, he would be living on our smoked salmon and fillet steak, because person food is Podenco food. 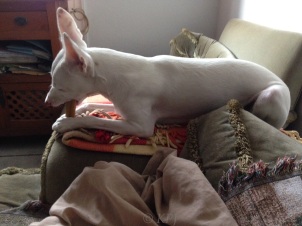 He asks to go out. Which means he stands at the door and glares accusingly.

He is an excellent guard dog. I’ve seen references to Pods being sight dogs, but most refer to their excellent senses in sight, hearing and scent. He can certainly hear Partner walking up the street, and senses cockroaches. He’s actually barked at the bathroom door and the sofa because he knows there’s one there. Not that he bothers killing them. That’s for Partner.

I’m pleased Podencos are finding homes and more people are becoming aware of this amazing breed. There will never be enough homes for rescue dogs. Spanish shelters are overflowing, despite the good nature of many Spaniards who do take them in, so Podencos are transported abroad, yet shelters in the UK, for example, also have plenty of dogs. There’s no easy solution. SOSPodencoRescue – for more info and pics – is one of many, many sites.

My message is the same. Please don’t buy dogs when there so many needing homes. Every dog you buy leaves, at best, a dog in a shelter, at worst, it could condemn one to death.

And here, is a beautifully short video of an incredible flying Ibizan Podenco.