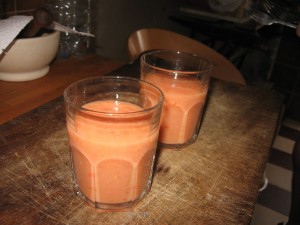 How many recipes for gazpacho are there on the Internet?

And how many English-speaking people can say they were taught how to make it by their 70+year-old Spanish neighbour?

Who grew up in the campo, and doesn’t read and write (apart from her name), and who still cooks Andalucian peasant cooking – even though her family prefers fast food.

Anyway, the answer is – me.

So take four or five large tomatoes. Say 1 lb or more. Peel them if you choose. I take out the cores, at least. 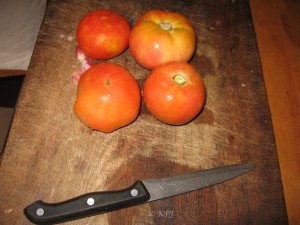 Put them in a blender or a batadora container. Add one or two reasonable-sized cloves of garlic. Some slurps of olive oil. Quite a few slurps, eg around 2 fl ozs. Definitely has to be extra virgin, cold-pressed.

If you have a favourite, use that. If you don’t like a strong-tasting one, use one of the blander mainstream ones. I use an aceite verdial from Periana in the hills behind us. I doubt it is exported. It costs around 20-25€ for five litres and it is excellent. Droolerific in fact.

Add some wine vinegar. Not too much, less than the olive oil, but say around a couple of tablespoons. Ordinary wine vinegar is fine because you need the sharpness, so don’t mess with any trendy vinegars. I use Vinagre de Jerez at any opportunity, but this is not one. Your average 40 cents a litre stuff from the local supermercado is fine.

Add a pinch of salt. I use rock salt. Today I had run out, so it was salt-free.

Blend or batadora it. Put it in the freezer for a short while unless you are organised and have left enough time for it to chill in the fridge.

Then, when it is nice and cold, re-whizz. Zzzzzz. Now this is actually the technical bit. Depending on how much oil you have added, or how juicy your tomatoes are, you may want/need to add some cold water. Bottled – I use Primavera.

The other adjustment to be made is the salt:vinegar ratio. Stick finger in (not while the machine is switched on – apparently one needs to include these sort of warnings because people are really dumb) and test for flavour. A few times obviously. I think I have just breached a few hygiene regs here.

Then pour it out. In our village it is served as a drink, so it comes in glasses or cups. You can add ice cubes if you want.

No, it doesn’t include peppers, cucumber, onion, or anything else, either whizzed up, or served on the side. This is a village, not a restaurant.